Whether you are a gamer or a heavy computer user like we are, you probably too suffers from headaches, eyes strain and other symptoms related to long staring at the screen, Gunnar Optics claims to have the best screen protector glasses in the world and are being recommended by Doctors around the world.

These glasses are considered “gaming glasses” which means they offer more than just radiation blocking.

Our website’s team checked those claims for you.

It sounds almost too good to be true: glasses designed to protect the eyes of gamers and users, and to prevent headaches, dizziness, and focus problems that result from prolonged staring at the screen.

How useful is it to the human graphics processor? We checked it for you!

When we were kids we were told to eat lots of carrots, because it was good for the eyes.
Since then computer screens have grown on every hill and under every fresh office neon light, and many of us spend most of our hours in front of them.

It turns out that the carrot was not enough, and many of us suffer from pain. The problem is called CVS – computer vision syndrome or DES – digital eye strain.

All these lead to CVS: dizziness, headaches, and migraines, muscle damage that causes spasms in the corner of the eye, difficulty focusing and frequent dry eyes.

Studies show that 70 percent of US adults suffer from CVS/DES.
In the long run, CVS can cause permanent damage to the quality of vision.

Most of all, gamers are exposed to these dangers. The combination of relative proximity to the screen on which motion, changes in brightness and color, and many details that require very heavy attention on the human graphics processor: the neural link between the eye and the brain. 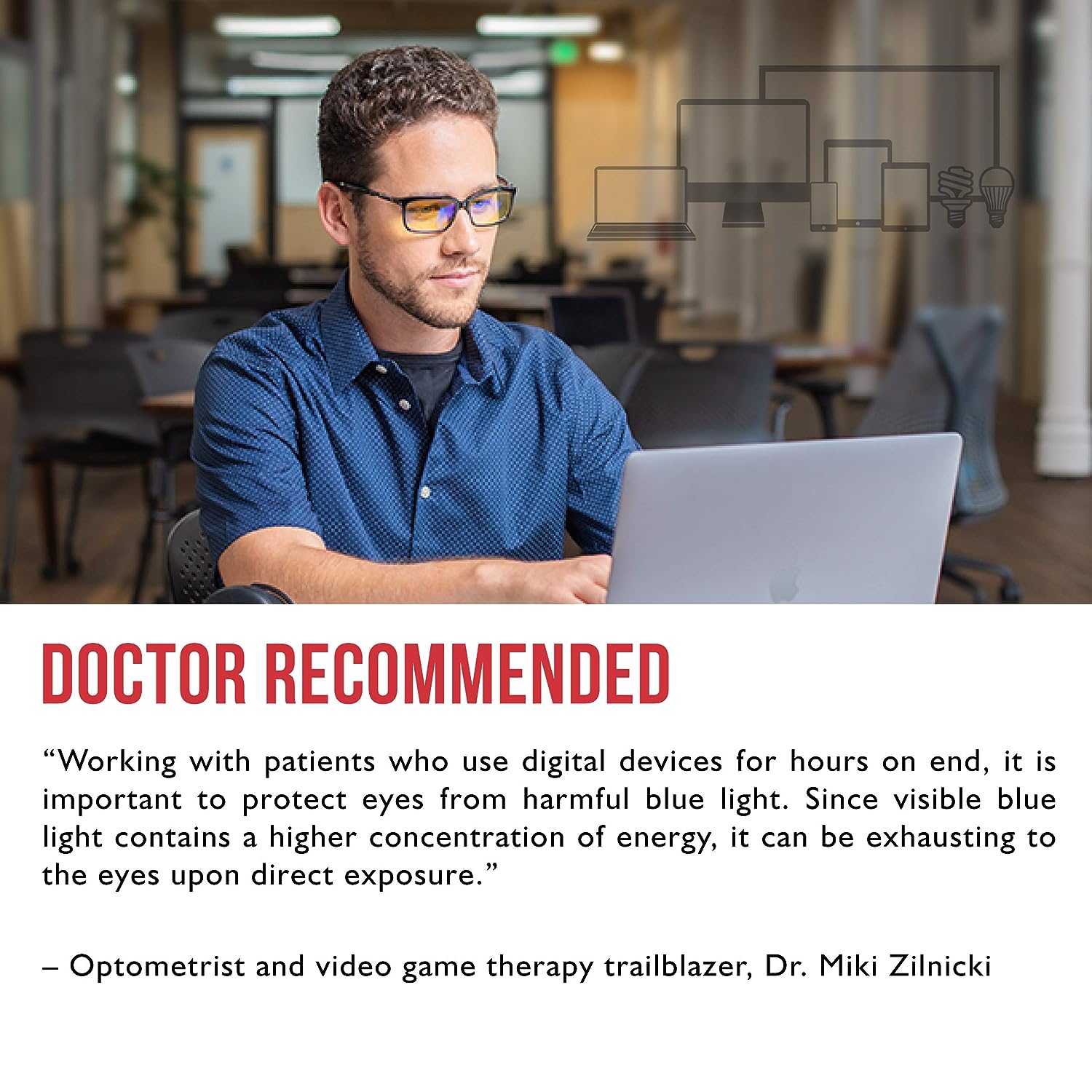 Gunnar has developed a product that is designed to solve all eye problems, headaches and other damage caused by the romance between a person and a screen: glasses against screen radiation.

It should be noted that at first, we were skeptical. anti radiation glasses sound like something from the brochure that comes in the mailbox along with your credit accounts and appears alongside earplugs that prevent you from snoring, an original bomber jacket, or a three-speed juice squeezer with a massager.

In the mid-1990s, external filters appeared for computer screens and even anti-radiation glasses.
Their contribution to the prevention of long-term screen viewing damage has never been proven and their effectiveness has been quite subjective.

However, our website team, which spends most of its time in front of computer screens, studied the glasses for about two months and discovered that Gunnar is promising and sustaining.

How Does It Work?

The filtration method is based on several components: First, the design and structure encourage maintaining a basic moisture level in the eye that prevents dehydration that causes burning of the eyes.

Second, the polishing of the lens (Carl Zeiss lenses) allows for better focus, which also contributes to sharpening the image on the screen and also requires less effort from your eyes.

Finally, the lens was coated with a material that filters radiation at wavelengths emitted from screens, focusing on the parts of the spectrum that efforting the eye. Gunnar calls this technology iAmp.

The lens color in the tested model (half a number, intended for people who does not use glasses) is quite yellow, which affects the observed shades.

This requires some adjustment but does not impair the user experience.

Presumably, if it is important for him to see Kratos’s robe or Lady Gaga’s clip on YouTube he will agree to compromise in order to avoid eye pain.

The use of glasses significantly changes the quality of the viewing. You can see an immediate improvement in contrast, which improves the gaming experience when it comes to gaming. Contrast also highlights some text in word processors.

The frame of the model tested is lightweight and made of titanium, and is produced by Swiss optics.

It is so light and imperceptible that it is easy to forget that you are wearing glasses.

The glasses come in a number of models that differ in the frame and color of the lens.

The difference between the various models is negligible except for the color of the lenses, which come in yellow and transparent.

The glasses with yellow lenses should provide better protection for the eyes by reducing the light and brightness that comes out of the screen, while the transparent lenses are designed for users that involve in graphics and video editing and need to detect natural colors when using the computer.

We found the minimalist design quite elegant, on the other – design is a matter of taste. 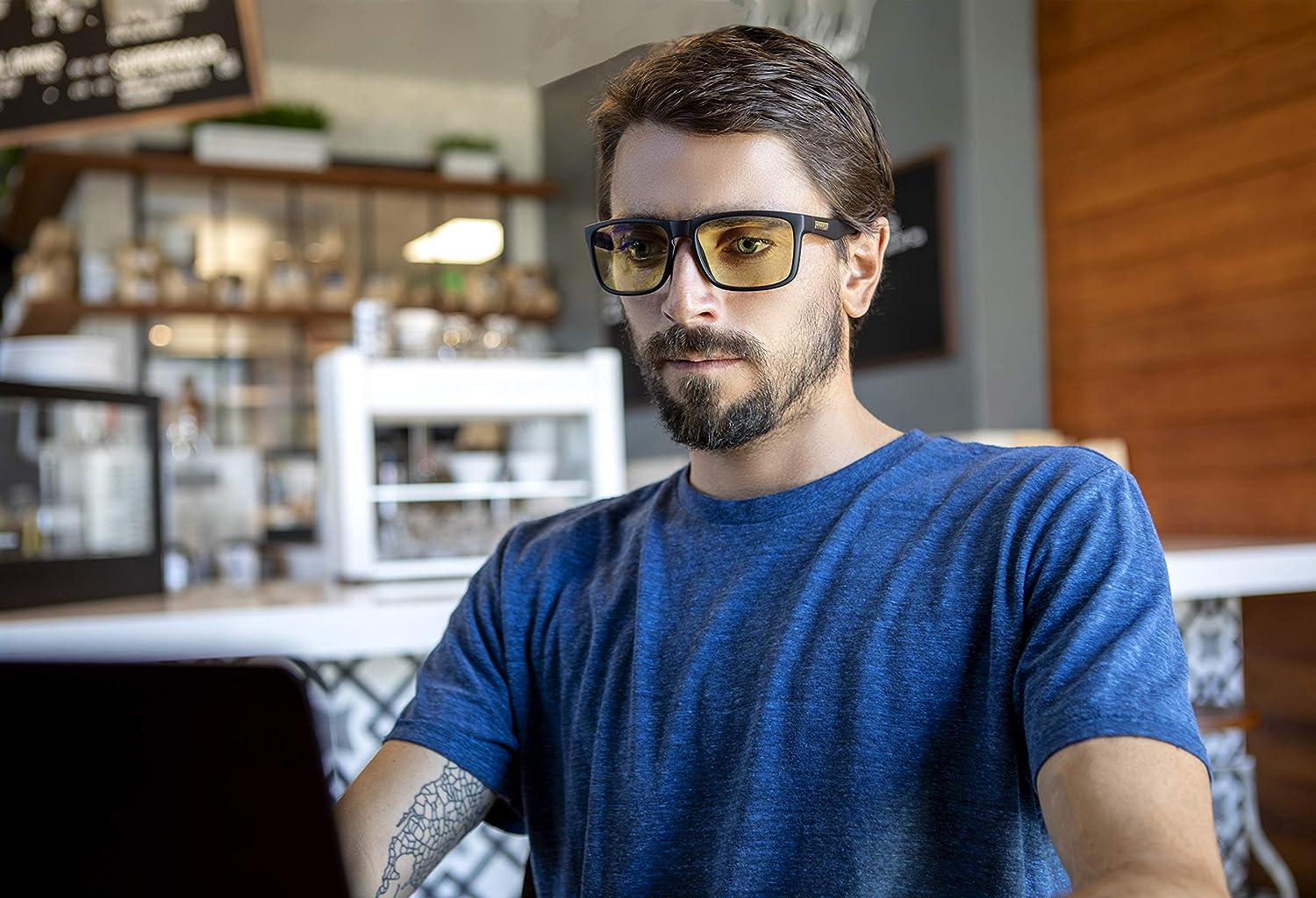 You can check out the Glasses here on Amazon.

What is a UV420 blue light radiation?

Like we have mentioned, in recent years, in light of our growing fondness for screens (televisions, computers, tablets …), a new enemy has emerged that threatens our eyes: the UV420 blue light.

In contrast to its more familiar sister (UV400), the UV420 blue light has never been treated in the past by the lens world.

But as we progressed, radiation sources began to surround us at home and at workplaces where we do not protect ourselves with sunglasses.

We are surrounded by television screens, tablets and computers for long hours every day and the meaning of the blue light emanating from them directly into our eyes can no longer be ignored.

Research shows that blue light is an artificial source of light emitted from the screens of electronic devices and may damage our vision functions to the point of speeding up phenomena such as cataracts.

How many exposure hours are “fine” and what level of exposure is considered dangerous?
As always – is difficult to determine since there are more or less objective studies, and there are varied answers to this and that.

A BPF is a scale of which we measure the level of protection from blue light and UV light.
The BPF of the Gunnar Optics is 65, which means that they block at least 65 percent of the blue light that radiates from your screen and 99 percent of UV light.

The glasses were tested for two months by the website’s crew. The experiment consisted of three weeks of continuous use, then alternating use – three days without use, followed by three days of using the glasses.

Finally, the glasses were tested when reviewing a console game, about two meters from a 37-inch screen.

The results showed a dramatic reduction in headaches, dizziness and other CVS symptoms in the subjects. It is important to note that different people respond differently to prolonged use of the computer and that those who do not spend long hours in front of a screen will not notice a significant change.

On the other hand, heavy users like us may find the product very useful and convenient. The model tested had yellow lenses that had better contrast, but models with transparent lenses are also being sold.

Another point to notice in older screens is screen jitter, which damages the concentration of the user and causes eyestrain.

The information we see projected on the computer screen for only a fraction of a second and in order for our brain to absorb a stable image it must be projected very quickly.

This can cause jitter, especially on screens with an old technology whose speed is not fast enough. This irritates the optic nerve and the person may feel irritable, lack of concentration and even fatigue.

In most screens today the jitter phenomenon almost never occurs. In order to ensure high projection speed, it is advisable to set the computer’s graphics card to the speed of unloading information on the screen of at least 60 Hz.

In the first use of the glasses, it is difficult to get used to the yellowish color of the lenses and the urge to remove the glasses and return to the natural form of work. This impulse is passing after prolonged use.
In another attempt, the glasses were composed over a relatively long period of time (two hours or more).
At first, they led to a headache and after that, some of us felt no significant differences between working with the glasses and working without them and others felt a big difference.

As a user who works many hours a day in front of the computer, I do not recall suffering from the side effects of sitting in front of the computer so I did not really see the need for glasses in the first place.
However, other people who used the glasses reported that after particularly long use of focusing on specific details and great movement on the screen, they felt less tired after using glasses.

In overall I think that people that experienced headaches and other symptoms related to prolonged sitting in front of the screen might find the glasses as very helpful while others, like me, who doesn’t suffer from it will find it not so beneficial, although it might be saving them from problems that might occur in the long run.

Do you use computer glasses? please share with us your experience with them in the comments below.

If you are a geek like me and likes gadgets than you have to read this article on the best anti-theft wallets here!

One thought on “Best Computer Glasses For Headaches And Eyes Protection”