In this article, I will try to explain how to build a nuclear bomb shelter at home on a very low budget.

First, a short history behind a building of a nuclear bomb shelters

The nuclear bomb shelter is designed with the aim of reducing exposure to fallout during a nuclear attack.
Bomb shelters were introduced in the late 1950s, during the Cold War. 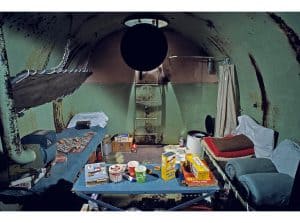 Some developed countries like the United States, Russia, and others build shelters in order to protect high-rank government military officials during the war.

Then, the bomb shelters were called bunkers and they were constructed underground, they had to be strong in order to resist and withstand any explosion and nuclear fallout that is likely to take place.

A regular shelter or a nuclear bomb shelter- what is the difference?

In contrast, a regular shelter is designed to protect against an explosion that produces a blast, but not from radiation and heat.
In addition, a nuclear bomb shelter is supposed to allow a minimum of one week of stay, without the need to connect to the outside world, with the idea that within a week the rescue forces will be able to contact the residents of the shelter.

Building your own nuclear bomb shelter

An unforeseen bomb attack can make an individual think about how to build a nuclear Bomb shelter or other types of structures that can protect and safe life against the destructive effect of a bomb.

One of the most important things to put into consideration is the exact location to erect the bomb shelter contrary to this, the major thing is to where the first blast of the bomb will be, this is because the bomb blast and the fallout that follows are very disastrous.

You want to know how to build a nuclear bomb shelter and don’t know how? currently, there are lots of construction companies that manufacture expensive ready-made bomb shelters, the only disadvantage is that they can be way far from your budget.

People have different taste when it comes to the building of nuclear bomb shelters. Many people would like to have it at the comfort of their homes and they would hire a company to build a small-sized bomb shelter that would contain all the basic and necessary amenities such as rooms, dining and a toilet.

While those that do not have more and enough money to spare will prefer to build their own small bomb shelters with their hands and also with the support of family and friend.

The following will provide details on how to build a nuclear bomb shelter.

How to build a nuclear bomb shelter at home

Before building a nuclear bomb shelter there are so many things to put into consideration parts of which include the condition of the soil within your social environment.

The soil condition differs base on the season so you must have knowledge of the best time to initiate the layout and do the digging. To be on a safer side you can do some test on the soil in order to know its holding capacity.

One of the major reasons why you should be concerned about the soil is that you need to dig deep and you want the soil to be soft enough for digging and capable of holding the structure. You need to start with concrete work soon after you have dug deep enough to gain entry into your proposed bomb shelter.

Turning an ordinary shelter into a nuclear bomb shelter

Any ordinary shelter can theoretically be used to protect against an atomic attack, provided that it is located underground.
This is due to the fact that the main building differences between a regular shelter and an atomic shelter are expressed in the thickness of the concrete walls and the insertion of double doors, ventilation filters and changes in the escape openings (upwards in the atomic case).

It is possible to build a nuclear bomb shelter outside a private home, but the experts recommend planning the shelter already with the construction of the house so that it can be considered at the planning stage and avoid the need for underground passages between the residential building and the shelter.

The shelter’s infrastructure is related to the residential building, and therefore it is advisable to take this into account at the planning stage.

In addition, the shelter is built from one residential space (which can be divided into rooms) and a “machine room” adjacent to the generator, as well as air and water filters.

The nuclear bomb shelter should be equipped with supplies that can hold the family for a week including food supply, material purification, water supply, garbage removal, and air filters.

When you are done with the construction work underground the time to stock up on supplies of water, canned goods, clothes and other provisions that may be needed for a long-term stay underground.

Designing an overview of a small size bomb shelter

As expected, an underground accommodation is restrained in standards, but in the case of a nuclear bomb shelter, it must have the following: bunk beds that can be folded up with lower bunks and which can be used to sit.

A toilet separated from the living room must also be made available. An entrance door that opens above the ground using a ladder placed at the entrance, this must be made available in order to provide access to the shelter.

An emergency door should be made available at the back of the bomb shelter which must be shorter than the entry hatch.

On the off chance that the main hatch becomes porous, the emergency hatch at this point would be very important.

The entry point of the emergency hatch should be opening inward just right under a foot of sand and above ground, it should be concealed.

Below are the which will help you to understand how to build a nuclear bomb shelter at home.

In case that a concrete walls shelter is too expensive and too complicated, a Pole-Covered Trench Shelter might do the work if dug deep enough and covered well.

It might not work against if the bomb will fall next to you as it will not protect against the initial blast but it sure can protect from the radiation that follows.

Basically, the idea is to dig the trench, then set the poles/logs to the top and finish the combination with some soil/earth at the top.

This might be a decent shelter that is theoretically very easy although It will require an intensive digging work.

You have to understand that this kind of shelter will not protect you from the initial blast if this one is happening close to you, for that you will need strong solid concrete walls around you.

However, if you are looking for protection against radiation and the heat that follows the initial blast than you have to understand that the more layers around you the less radiation will reach you.

This is why a trench covered with enough layers such as poles, soil, water bottles etc, can prevent the radiation from coming in to touch with your body.
Basically, you want to make a barrier between you and the radioactive fallout.

Here is a nice video explaining about a trench fallout shelter.

How to build a nuclear bomb shelter at home is up to you.
Basically, any existing underground shelter can be turned into an atomic shelter – by thickening the concrete walls and a few adjustments.
The cost of building an atomic shelter depends on the size of the shelter, and in any case, it is a project that is not cheap at all.
In the design of an atomic shelter, there are no clear standard definitions and the planning is based on accumulated knowledge of professionals, The definitions relate to the level of the explosion that occurred in Hiroshima and Nagasaki, and are the basis for calculations.
So yes, thick concrete walls are highly recommended but if it is completely out of your budget or capability than you should try the shelter mentioned above.
I hope that this article has helped you a bit to understand how to build a nuclear bomb shelter.

We have a related article for you, you can read here about the best nuclear war survival kit.

What kind of world would those few who knows how to build a nuclear bomb shelter at home will meet after a nuclear bomb? This is a completely different question.