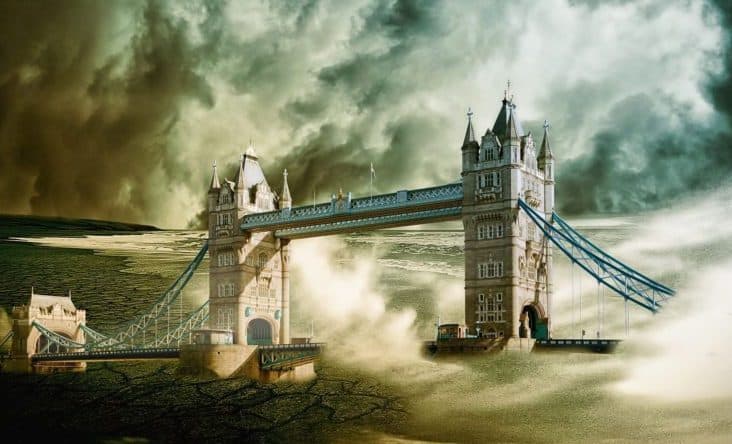 I have seen the horrors that a tsunami can bring and so I have decided to research and write about how to protect yourself from a tsunami.

Tsunamis are violent and devastating manifestations of our planet, which have the power to wipe out any settlements found on coastal areas.
While it is true that they don’t occur all over the planet, so not all coastal areas are subjected to the risk of being affected by a tsunami, it is worth knowing how to protect yourself from a tsunami as you may travel to areas where tsunamis can strike.
Thus, learning as much as you can about tsunamis and safety plants that will keep you protected can be very useful in case you will have the unfortunate chance to witness one.
But, don’t worry, as tsunamis don’t happen very often, requiring special conditions to form, so this shouldn’t stop you to travel around the world.

What Is A Tsunami?

To better understand the safety measures in case of a tsunami, you should first understand what a tsunami is.

The name “Tsunami” comes from a combination of the words in Japanese, which means “wave in the harbor”.
The name was created after stories about Japanese fishermen who had gone fishing in the ocean and when they returned to the port they discovered that a large wave had completely erased it.

The tsunami is a natural phenomenon characterized by a set of giant waves, coming from the ocean toward the land.

The waves of a tsunami can have a height of several feet and they are caused by earthquakes or volcanic eruptions that take place on the floor of the ocean.

Thus, when the earth’s crust that forms the ocean bed suffers dramatic changes or moves under the action of earthquakes, waves are formed in the water mass of the ocean.
Even a large meteorite can create a tsunami, but it is a very rare event, one that occurs once in many generations.

Out in the open, the waves are not that large, but they increase in size as they approach the land. So, they are the tallest as soon as they hit the coastal area, which explains their force and strength.

Tsunami waves can move at an incredible speed of nearly 1000 kilometers per hour!

Watch This Interesting Documentary On Tsunami!

Signs Indicating That A Tsunami Is Approaching:

How Long Does A Tsunami Last?

The amount of time in which water is flooded on land is between several hours and several days.

Do Animals Have The Ability To Feel An Earthquake Approaching?

Probably so.
Testimonies from the tsunami that attacked Thailand told us a lot about the nervousness and flight of animals that were not imprisoned or tied in the hours before the tsunami arrived.
It is clear that in the post-Tsunami investigations it became apparent that no released animal or pet was affected by the tsunami, in which hundreds of people lost their lives.

These testimonies were added to observations by zoologists in animals, which saw how they detected earthquakes that occurred hundreds of kilometers away from where they stood.

Studies have shown that various actions of the elephant, including walking and running, groaning or snoring, create a kind of tremor in the ground, a kind of seismic seal that distant elephants can recognize as a warning and escape from an approaching catastrophe.

Protect Yourself From The Preliminary Earthquake:

It is worth mentioning again that a tsunami will be preceded by an earthquake.
So, if you are on a coastal area and you feel the significant earthquake do know that the waves of a tsunami will reach the beachfront in a few minutes, time in which you can take cover.

Once the waves hit the land, the danger can last for a few hours in a row, so it is recommended not to rush outside until you are entirely sure that everything calmed down.

A tsunami can occur at night or during the day, and they are the kind of phenomenon that may occur at any time of the year, as it depends on the movements of the earth’s crust and not on the weather.

If you don’t have a table or near in your proximity, use your arms to cover your neck and head, while staying low on the ground.
This will help you avoid being injured by falling objects.

If you are outside, do your best to be away from the proximity of buildings, as pieces may fall off their surface during an earthquake.
So, if possible, seek a safe area out in the open or enter a building and seek cover.
Once the earthquake is over it’s time to take precautionary measures for the incoming tsunami.

You can read more on how to protect yourself from an earthquake here!

How To Protect Yourself From A Tsunami?

First of all, you should make a safety plan before a tsunami occurs.
Because no one can tell when a tsunami can occur, it is important to have a well-made plan in advance.

For example, plan safety routes from work, school, or home in the event of a tsunami, routes that can be used in order to get to a safer place.

Ideally, you should choose a safe location that is 2 miles inland from the coastal area, minimizing the risks for the waves to reach you, or that is 100 feet above sea level.

If you can’t go this far, it is recommended to go as high or far as it is possible because every foot that takes you further away from the critical area will increase your safety.

Also, have in mind that the safety area should be reached in 15 minutes, at most, by walking on foot and not by car.
To make sure that the entire family knows the safety route well, practice the escape plan periodically and walk this route even at night or on bad weather so that you’ll be well prepared. 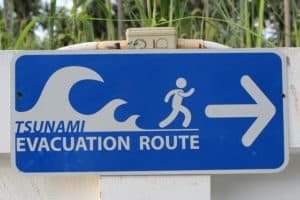 After an earthquake, listen to what the authorities have to say as they will warnings in case a tsunami will occur.

Be ready to change your safety route if needed, as the authorities may advise you to reach a higher area than you initially considered.
As soon as you hear a tsunami warning, leave your current location immediately and head towards the safety area you picked.

Before leaving, take along your emergency kit, which should contain all the items you may need during the evacuation, and take your pets as well, as a tsunami is as dangerous for them as it is for you.

Do not watch the waves from high cliffs, do not stand close to bridges and rivers, as the waves can advance inland through rivers, and stay away from any fallen power lines.
Do not return home until the authorities announced that it is safe.

If you have pets or animals, make sure to include them in your safety plan.
Thus, have an emergency kit ready for your pet and in case you have animals living in the outdoors, make sure that the fences surrounding there area will allow them to reach higher grounds in case of a tsunami, so they can seek refuge in times of need.

If possible, it is recommended to avoid living in coastal areas, as they are most exposed to the damaging actions of a tsunami.
Still, if you have a home on a coastal area, then elevating the house’s level will help reduce the damage.

Having in mind that, in most cases, the waves of a tsunami aren’t higher than 10 feet or 3 meters, you can use this information to find out just how much you need to elevate your home.

Also, inviting an expert to take a look at your home and check for any weak spots or giving you advice on how to get your house ready to face a tsunami better is more than recommended.

If you are living or planning to travel to a tsunami’s risked area it is very important to be prepared.
Make sure that you and your family know the escape routes in advance.
Since a tsunami accrues as a result of an earthquake, stay safe from the earthquake first by going on the ground under a table if possible and protect your head.
In case you are living in a danger area, preparing your home is a must, and it is highly recommended to do it with a help of professionals.

I hope that I helped you understand better how to protect yourself from a tsunami.
I fou have any additional comments, please leave them in the comments below.